BREAKING: “It is our duty to fight for our freedom”

BREAKING: “It is our duty to fight for our freedom” Thousands pledge to continue fighting proposed policing laws outside Parliament

At 18:00 on Tuesday 16 March, thousands gathered at Parliament Square for the fourth consecutive day of protests for Sarah Everard and against the Police, Crime, Sentencing and Courts Bill moving through Parliament. Speakers at the protest called the Bill an “assault on freedom” and implored Members of Parliament inside to “kill the bill.”

This demonstration happened at the same time the bill had its second reading in Parliament. The vote was called during the demonstration, and whilst it passed this reading 359-263, protestors pledged to continue fighting, chanting a popular refrain from Assata Shakur, “It is our duty to fight for our freedom – it is our duty to win.”

A speaker from Sisters Uncut announced the reading vote, saying, “This is just the beginning. We will fight in our thousands at every stage, and we’re just getting started. Join us. We will not be silenced.”

Earlier this morning, feminist activist group Sisters Uncut laid 194 bunches of flowers outside Parliament spelling out “Kill the Bill,” commemorating the 194 women killed by police and prison violence since 2010.

Speakers referenced police at Clapham Commons on Saturday who ignored sexual harassment of women protestors, spoke about the dehumanising photos taken by police of Nicole Smallman and Bibaa Henry after their deaths, and invoked the names of Black people who died at the hands of police. Members of Sistah Space, a Black-led domestic violence support centre, said, “This is for Sarah, for Sandra Bland, for Breonna Taylor, for Nicole and Bibaa. If you see a Black woman arrested, get involved.”

A speaker from human rights campaign group Liberty said: “We are here today because government wants to pit us against one another, to criminalise our right to dissent, to challenge when we dare to stand up to power. They are voting against our right to protest, they are telling us that objection to oppression is worse than the oppression itself. But protest is a fundamental human right, not a gift that the state can take or give away as a gift at its pleasing. We demand the right to take to the streets. We demand the rights to organise together. We demand the right to be out at night. We are here, we are together, and we are not afraid.”

A member of SOAS Detainee Support (SDS) added, “We know the state is the greatest source of violence. Policing as we know it today was born out of British colonialism, and the role of policing was to protect white men’s private property and to oppress and control black and brown people. This new Bill will disproportionately affect migrants, someone protesting at parliament square could be arrested and detained and deported, just for protesting. The police must not be handed more powers through this Bill… Policing is not the way out of the crisis, policing is the crisis.”

A speaker from Sisters Uncut concluded the protest saying, “As feminists we condemn the violations of consent, the use of forced restraint, the devastation of being separated from our loved ones and these violent experiences that are fundamental to the function of the criminal justice system. If the government is serious about ending violence against women, it will halt this bill.”

At the end of the protest, participants spilled into the streets, chanting “Kill the Bill.”

An anonymous member from Sisters Uncut said, “Every day, the movement against this Bill grows in number and in anger. We saw in the summer that many people, especially young people, are sick and tired of being on the sharp end of police repression. Now a broad coalition is coming together to fight this dangerous extension of police powers.” 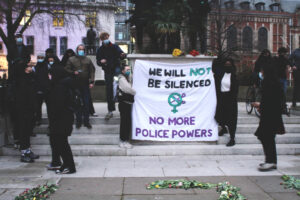 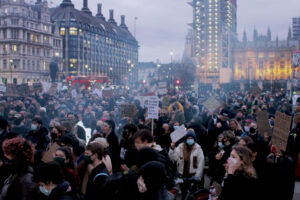 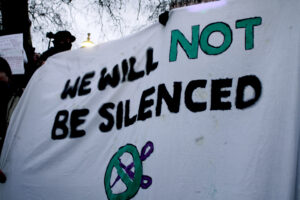 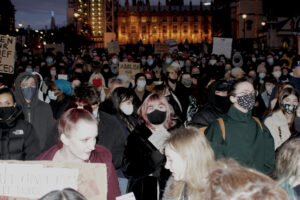 'Abolish the police' - what does that mean?
BREAKING: Sisters Uncut call fourth day of action against police powers bill
Tweets by @SistersUncut