BREAKING: Tens of Thousands take to the streets for Mayday Kill the Bill protests

On Saturday 1 May, tens of thousands turned out to lively ‘Kill the Bill’ protests across the UK. The demonstrations are the latest in the public protests against the government’s police powers Bill.

In London an estimated 10,000 people attended, and events started at midday in Trafalgar Square, where gathering crowds watched as feminist campaign group Sisters Uncut drove up to the square in a red double decker bus playing grime music from speakers and shouting  ‘Kill the Bill!’.

Using portable speakers on the back of a pick-up truck in Trafalgar Square, a rally was held featuring speakers from Sisters Uncut, the youth empowerment organisation The 4FRONT Project, anti-school exclusions campaign group No More Exclusions, Gypsy, Roma and Traveller Socialists, Women of Colour and Sex Worker Advocacy and Resistance Movement (SWARM).

Shortly after, the crowd of thousands set off in the streets towards the Home Office, where speeches were given from atop the double decker bus, including students from Pimlico Academy who recently walked out of school in protest of racist school uniform policies. Activists expressed solidarity with Osime Brown, a young autistic Black man currently facing deportation to Jamaica.

The crowds marched over Vauxhall Bridge to Vauxhall Pleasure Gardens to participate in several direct action workshops including how to intervene in police Stop and Searches, how to resist evictions and how to stop immigration raids.

This is the latest demonstration in the ‘Kill the Bill’ movement – a coalition of over 40 activist groups who have joined forces and taken to the streets since March to reject the controversial Police, Crime, Sentencing and Courts Bill which is due to resume its path through parliament in May.

The groups are committed to disrupting the Bill’s progress through parliament at every stage and have lifted up the Bill’s attack on racialised communities, the right to protest, and on civil liberties.

The Police, Crime, Sentencing and Courts Bill is a 300-page piece of proposed law that seeks to increase police powers in terrifying ways. It will drastically impact the lives of Gypsy, Roma and Traveller communities, give police expanded Stop and Search powers and criminalise the right to protest. Lawyers argue that this proposed legislation violates international law.

Sara Parkes, a teacher who attended the protest said: “The resistance that’s building against this Bill is so inspiring, and there are people who are coming together to learn more about how it impacts all of us in different ways. As a teacher, my concern is the government proposals around ‘secure schools’, which are effectively youth prisons. We can’t let this pass into law.”

An anonymous member of Sisters Uncut said: “The police powers bill should be scrapped entirely. It is authoritarian in tone and in nature, and will lead to more abuse of police powers. It will take a mass movement to force it to be thrown out of parliament.

If this police powers bill becomes law, we will see even more police violence – against people who speak up against injustice, and specifically against Black, Muslim and Gypsy, Roma and Traveller communities.” 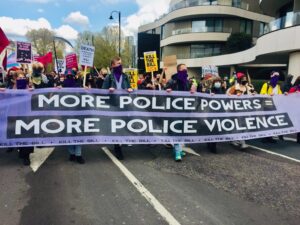 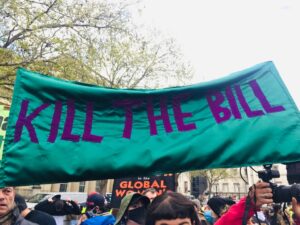 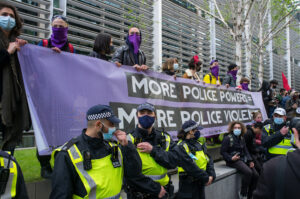