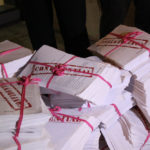 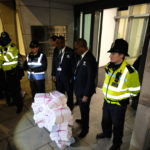 Tonight, Sisters Uncut delivered 30,000 sheets of paper to the door of the Crown Prosecution Service, on Max Hill QC’s first day in post as its head. 30,000 sheets of paper was enough to prompt an evacuation of the building, but according to CPS policy it is a perfectly acceptable amount of personal data to demand from survivors reporting sexual violence.

Recent controversy over failed prosecutions has resulted in increasing demands for access to all text messages, calls, social media and app data. Survivors are now routinely told that their cases will be dropped unless they agree. The new policy has made the situation much worse for survivors, who already faced having their medical, social services and counselling records trawled through by the police and CPS, handed over to their abusers’ defence teams, and used to undermine them in court. Recently publicised examples include calls made and texts sent after the assault being used to argue that the victim was not traumatised enough for the assault to have taken place.

We’re sick of hearing about the impact on perpetrators. We demand that the CPS stops investigating survivors. Halt phone downloads now, and spend the money saved on transformative responses that genuinely disrupt sexual violence, rather than putting survivors on trial.