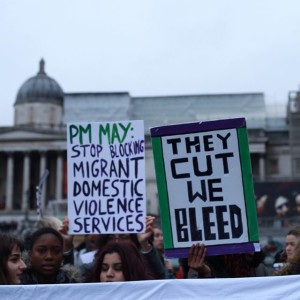 Yesterday, Theresa May PM called a snap general election, which will take place on 8th June. So, in less than two months we might have a new government, or we could face another five years with the Tories. Let’s be honest, the last year in politics has been confusing, terrifying and for many of our Sisters, violently life-threatening. This election is set to be another scene in the world’s bleakest soap opera, unless we take action.

Sisters Uncut is non-partisan and revolutionary; that means we don’t give our support to any mainstream political party and we believe that the current political system is broken and harmful to all of us. But being non-partisan doesn’t mean that Sisters think all political parties are the same or that it doesn’t matter which one is in power. For many women and non-binary people living in the UK, or seeking refuge here, the political party in power really could mean the difference between life and death.

As anti-capitalist, anti-racist feminists, we are staunchly anti-Tory. Their conservative capitalist ideology is racist, sexist, and ableist. This Conservative government, led by David Cameron and now Theresa May, has subjected women and non-binary people to vicious attacks on our safety, liberty and welfare. They have consistently ignored the demands of disabled activists, communities of colour, working class and migrant campaigners, instead forcing through a swathe of sinister cuts, laws and public service sell-offs that put our lives at risk on a daily basis.

We think it is important, during a period when biased government propaganda will be unavoidable, to make clear our strong opposition to the Conservative government by stating facts about their ‘leadership’. If the last 12 months has left you swimming in political uncertainty, below is a list of acts and failures that this government has perpetrated against women and non-binary people:

– Since 2010, at least 34 specialist refuge services have closed due to funding cuts, with 66% of those left open at risk of closure due to financial uncertainty. Those closed were disproportionately specialist services for women of colour.
– 85% of the Tories vicious austerity measures have fallen on women, most affecting disabled women, single parents and working class women of colour
– The plans to abolish housing benefit for 18-21 year olds puts thousands of younger survivors of domestic abuse at risk
– There are set to be whole cities without one single refuge for survivors of domestic violence due to funding cuts
– At least two-thirds of domestic violence survivors were turned away from refuges in 2015/16, for disabled survivors this increased to 75%
– In June 2016, the Home Office refused to reveal information about the sexual abuse of migrant women detained at Yarls Wood immigration detention centre in Bedford, because it ‘damages the commercial interests’ of Serco
– In April 2017, the government introduced plans to force survivors to ‘prove’ they were raped, to be eligible for tax credits for a third child
– 22 women died in prison in 2016, the highest number ever recorded, and yet rather than admit the prison system is a violently oppressive failure, there are plans to build 9 new ‘super-prisons’ across the country
– Failure to act on the 71 recommendations made in the Transgender Equality report written in January 2016, a clear show of contempt towards trans* people.

Tory cuts show a hatred of women and non-binary people, a complete refusal to safeguard the most vulnerable amongst us from life-threatening violence and a determination to cover up and deny state violence that is frankly terrifying.

A Conservative government is a violent government, and therefore, we encourage all Sisters to oppose five more years of state violence in our homes and communities, by putting an end to this misogynist, racist, transphobic Tory leadership. Now’s the time to stand up and be counted sisters – vote against the Tories & other right-wing parties on June 8th, get involved in your local Sisters Uncut group, share your anti-Tory views on social media and talk with friends, family & colleagues about why the Tories are the enemy of the people. It might be bleak right now, but together we shall overcome.