Four thousand, seven hundred and forty five.  That’s the number of pieces of green and purple confetti released by Sisters Uncut into a Portsmouth city council budget meeting on Tuesday. A council budget meeting set to pass brutal cuts to domestic violence services. Why 4,745? Because that is the number of incidents of domestic violence reported to the police in Portsmouth in 2014-5.

You would think, therefore, that police in Portsmouth, who are part of Hampshire Constabulary, are pretty busy. Especially considering that in a 2015 HMIC report, they were criticised for putting victims of domestic violence at risk by assessing them over the phone rather than seeing them in person — presumably because they didn’t have enough time and resources to do so.

The report notes that by using this “resource-saving” practice, they are putting vulnerable victims at higher risk of violence. Hampshire police also have a lot of work to do to keep women and non-binary people safe from other types of violence — another report found that they are not sufficiently prepared to help victims or prosecute offenders in cases of forced marriage or FGM. Significant additional resources would be needed to prepare them for this — and they won’t be getting any more resources from central government.

Sisters leaving the council chamber peacefully after the meeting were met with intimidation and physical aggression from security and police officers, leaving several sisters with visible bruises and other injuries. The police used violence to exert authority and control, just like perpetrators of domestic violence do. One Sister was arrested and taken into a locked room guarded by the police, denied access to an independent legal observer whilst being searched, and not given a legal basis for her search. She was then taken to a cell and held there for 7 hours. All this for 4,745 pieces of confetti. 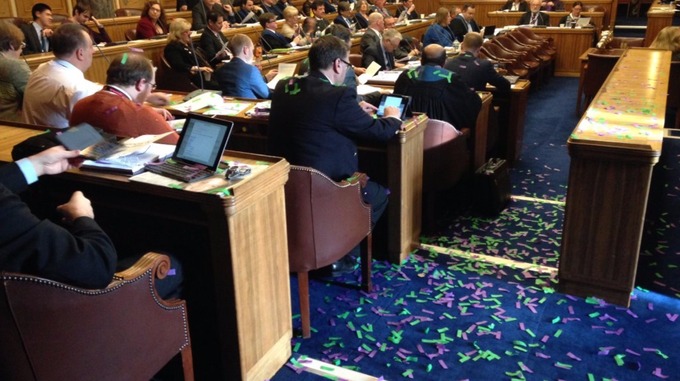 Sisters Uncut are known for visually creative and lively protest methods. This is one of our tactics for getting attention. But the Sisters in that council chamber on Tuesday were not there for fun. They were there because 2 women a week in England and Wales are murdered by perpetrators of domestic violence. They were there because they are terrified about what is going to happen to women trapped living with violent partners in Portsmouth, no longer able to access the support they need to escape. They were there because they are terrified for their own lives: many women and non binary people are in the face of male violence, especially when there is little support to protect them.

People take direct action when they are desperate, and Sisters Uncut are desperate to be heard. Formed by sector workers and survivors of domestic violence, Sisters Uncut know what happens to women who do not have access to support.

When discussing state violence against women, especially violence meted out by police, we should also remember black women like Sarah Reed. Sarah Reed was a young, black woman who in 2012 was beaten up by a police officer (the assault was caught on film) and in January 2016 was found dead in her cell at Holloway Prison. The police cannot be counted on to protect women like Sarah Reed: working class women, women with mental health issues, women of colour. They cannot be counted on to protect trans women, queer women and women with disabilities.

We’re grateful for the #SisterSolidarity we’ve received from our supporters and survivors of domestic violence, many of whom have been let down by the police when they have reported violent perpetrators. We stand in solidarity with you all.