This evening, thousands gathered on Clapham common to publicly mourn and honour Sarah Everard, in defiance of police orders against the vigil organised by #ReclaimTheStreets. The majority of the crowd were women.

Around 6pm, people laid hundreds of bouquets of flowers around the bandstand. Women in the crowd took it in turns to stand on the bandstand and deliver call-and-response speeches to the crowd, saying “the streets are ours and we deserve to be safe on the streets.”

Around 6.30pm, shortly after sunset, Metropolitan police stormed the bandstand and told members of the public to “go home”. By 7.30pm, police were grabbing and manhandling women in the crowd and ripped down a banner held by women.

After a stand-off, police left the park and the crowd began to disperse at 8.00pm. Numerous groups stayed in Clapham Common to quietly lay flowers and light candles.

National statistics show every 3 days, a woman is killed by a partner or ex-partner.

Sisters Uncut are protesting against routine and systemic violence perpetrated by the police. This includes members of the police who last summer took photos of the dead bodies of two Black women, Bibaa Henry and Nicole Smallman and who routinely perpetrate domestic and sexual violence.

Recent research by the Prison Reform Trust found that survivors reported being repeatedly arrested by the police despite their partner being the primary aggressor.

With increasing cases of domestic violence across the country due to the ongoing pandemic and a criminal justice system that only increases violence, Sisters Uncut say that the right to publicly protest state and interpersonal violence is more important now than ever before.

“We have come here today because of grief, and anger, at the senseless murder of of Sarah Everard, we have come here today, because after Sarah’s disappearance, the police told women to stay at home. This isn’t the first time. Almost 50 years ago, when another murderer, the Yorkshire Ripper, was attacking women, the police said that the only way for women to remain safe was to stay at home. Then and now, women say no.”

Today, thousands gathered for a vigil at New Scotland Yard to publicly mourn Sarah Everard and all victims of state and gendered violence, and to reject the police violence against protestors demonstrated at yesterday’s vigil at Clapham Common. Over two thousand more joined a livestream of the vigil.

Shortly after 4pm outside New Scotland Yard, the police attempted to kettle protestors. After a minute’s silence for Sarah Everard, the crowds moved to Parliament Square.

In Parliament Square, some spontaneous and planned speeches were made, featuring MP for East Nottingham Nadia Whittome who emphasized that the Police, Crime, Sentencing and Courts Bill will expand police powers and diminish the right to protest. She said, “This bill will see the biggest assault on protests rights in recent history. If this bill passes, we won’t be able to gather outside Parliament Square anymore in mourning like we are today.”

A woman spontaneously burst forward from the crowd, identifying herself as the best friend of Iuliana Todos, who was murdered in Finsbury Park on Christmas Eve in 2017. She described how the police had failed to investigate the case, and Iuliana’s friends had found her mutilated, naked body in the park three days later. The woman said “Her name was Iuliana Tudos, her case was not in the media, please remember her.”

Participants echoed calls for Police Commissioner Cressida Dick to resign in chants, following the graphic images circulating of mourners being brutalised by the police at Saturday’s vigil, and chanted “the police do not protect us” and “sisters united will never be defeated.”

Participants highlighted the over 200 deaths of women, trans people, and gender-non-conforming people at the hands of the police. A speaker led a chant in mourning of these people, saying, “Rest in peace to Sarah Everard, to Breonna Taylor, to Shukri Abdi, to Black trans women who have been murdered, to all women, trans people, gender nonconforming people, and all those killed by police violence.”

Participants took a minute of silence and lay down in Parliament square. took a knee to honor these victims of police and state violence at the end of the event, and many attendees brought flowers in mourning.

The vigil dispersed peacefully at 5:30pm.

A speaker from Sisters Uncut said: “Three women a week are murdered in the UK. Gendered violence is not just a personal problem – it is structural. It happens in our homes, on the streets, at work. And the police, courts and state don’t protect us or keep us safe: they are part of the problem.”

“Yesterday, women came to grieve and were brutalised by the colleagues of the man who may have killed Sarah Everard. This has illustrated why police cannot be granted even more powers – because they already abuse the ones they have. And women – trans intersex and cis- pay the price.”

“More police on the streets means even more violence against women. The government are also using the funding of more police to justify 500 new prison places for women. This decision directly goes against all evidence bases that show we should be locking fewer women up. It’s specialist community services, public resources and support that keep our communities safe.” 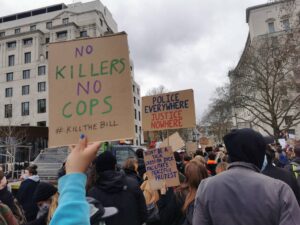 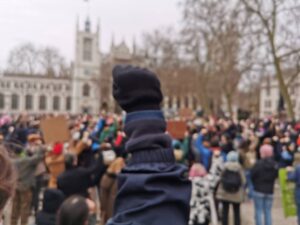 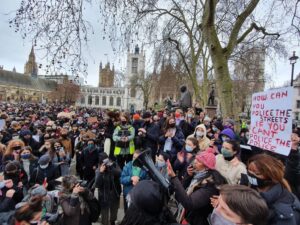 Our Response to Boris' Statement: No More Police Powers
Why we gathered at Clapham Common, even when we were told not to
Tweets by @SistersUncut