Sisters Uncut statement on the sale of Holloway Prison

After reclaiming Holloway Prison’s Visitor Centre and working with community groups on a new vision for Holloway, we at Sisters Uncut hope that the new owners, Peabody, will listen to our demands and stick to their promises.

In May 2017 we reclaimed Holloway Prison’s Visitor Centre. We transformed a space of state violence, holding a week-long community festival with activities and workshops and demanded that the land continued to be used for public good.

We demanded that the land be used to provide genuinely affordable housing, and host a women’s* building. This building could provide services to all women and non-binary people affected by state violence, especially supporting survivors of colour, LGBTQ and disabled survivors.

New owners, Peabody, reached out to us today. They have promised a minimum 60% affordable housing provision and a Women’s Centre on the old prison site. We are glad to see our demands reflected in Peabody’s statement, and we are keen to enter discussions with them to create a new vision for Holloway which works for the community. We remain sceptical until we see our demands met in practice.

Community demands are all too often forgotten about or diluted beyond recognition in the implementation phase. We will keep on fighting ensure this land is actually used for public good, and not just as good PR for Peabody. One aspect that already gives us concern, is the changing of ‘women’s building’ in our initial demands to ‘women’s centre’ in Peabody’s documents. We will hold Islington Council and Peabody to account over our demands to ensure they are not watered down.

We regret that the sale of this land has helped generate income for the Tories’ plan to build new mega-prisons’, which slash prison budgets while doing nothing to reduce prisoner numbers. Prison and detention are dehumanising, racist, classist, sexist and transphobic. We do not believe that prisons offer a solution to crime. We at Sisters Uncut continue to fight state violence and injustice.

“Abolitionist feminism is a response to the carceral feminism of the past. This project will help to create greater insight, and hopefully more action against the prison industrial complex.”

Angela Davis speaking about the reclamation of Holloway Women’s Prison, 2017

Our demand is that the money made from the sale of the prison be used to fund services in the planned women’s* building. Using money from the sale of the site would be a symbol of recognition and reparation for local survivors of domestic and sexual violence and the women of Holloway Prison.

We hope the new site can act as a remedy for the pain so many women suffered at the hands of state violence.

* ‘Women’s Building’ is the language used by Islington Council. We will fight for a building and services that are available to all non-binary, gender non-conforming people and women and that the name is changed to reflect that.

Images from the week-long community festival we held in the reclaimed visitor’s centre of Holloway Prison. 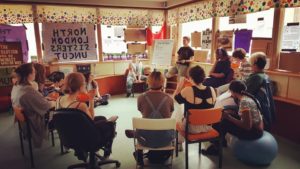 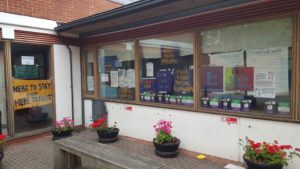 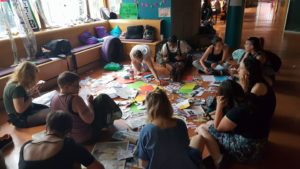 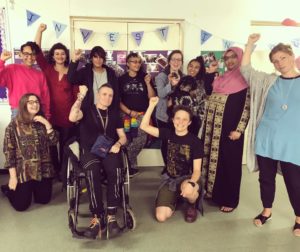 Why we plastered our demands on the fence of Holloway Prison
PRESS RELEASE: Sisters Uncut hack tube poems to amplify voices silenced by the state
Tweets by @SistersUncut