A group of activists from Sisters Uncut jumped onto the carpet as celebrities were arriving at the ceremony wearing t-shirts declaring “Time’s Up Theresa.” While laying on the red carpet, they chanted “the DV Bill’s a cover-up, Theresa May your time is up.”

In their highest-profile action to date, the group aim to add another voice to the global Time’s Up campaign against gender-based violence, by demanding that the government meet their obligations to support all survivors of domestic abuse.

The Prime Minister has made clear that she intends the Bill, which is still under consultation in parliament, to bring in tougher sentences and “deliver more convictions” for domestic violence. Sisters Uncut say that these measures skirt the government’s responsibility to support all survivors of domestic violence, leaving them locked up in prison, locked out of refuges, and locked in to violent relationships.

In the US, similar policies to those the Domestic Violence and Abuse Bill is expected to introduce have led to an increase in the number of survivors being arrested, especially black and minority ethnic and poorer survivors. Such criminalisation of survivors is already happening in the UK, and is extremely dangerous, as highlighted in recent reports about the death of Katrina O’Hara, who was murdered after being wrongly investigated by the police instead of her violent partner. Recent research by the Prison Reform Trust found that survivors reported being repeatedly arrested by the police despite their partner being the primary aggressor.

Other stories show certain survivors face much greater risks when they report abuse to the police, such as in the recent case of a rape victim being detained and threatened with deportation. Sisters Uncut say that the Bill will only make these stories more common, and highlight the fact that already, 57% of women in prison are survivors of domestic violence who should have received support, not sentences.

Suzanne Da Costa, a domestic violence helpline worker who took part in the protest, said: “Imagine calling the police for help and ending up in a police cell – it’s incredibly traumatic and a story I’ve heard too often from survivors. We shouldn’t be giving the police more power, we should be giving power back to survivors”.

Sisters Uncut say that the Domestic Violence Bill is a dangerous distraction from the austerity cuts that have decimated the domestic violence sector since 2010. Refuge budgets have been slashed by almost a quarter, resulting in 1,000 women and children being turned away by refuges over a six-month period, according to The Bureau for Investigative Journalism. This is set to worsen if the government proceeds with plans to remove housing benefit funding from refuges.

The global Time’s Up campaign, set up after the release of an open letter from the Latina Alianza Nacional De Campesinas (National Farmworkers Women’s Alliance) showing solidarity with Hollywood actors who have experienced abuse, has been championed by entertainment industry figureheads. On the link between the campaign and today’s action, one of the protesters Ana Kaur said:

“We are in solidarity with the Time’s Up campaign. Like the Alianza Nacional De Campesinas, we recognise that gender-based violence happens everywhere, and that to disclose abuse requires support. As well as calling Time’s Up on individual perpetrators, we have to call Time’s Up on our government for failing to provide us with real options and support”.

No arrests were made. 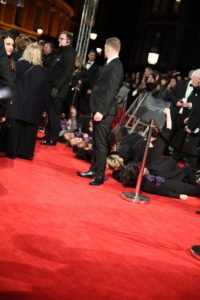 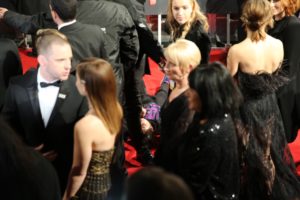 Scottish Survivors are Locked Out & Locked Up
The criminal justice system perpetuates violence: we need a better solution
Tweets by @SistersUncut