#NoSisterIsIllegal: Sisters Uncut Week of Action Against Prison and Detention 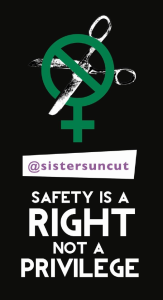 Sisters Uncut stand in solidarity with our sisters detained and imprisoned, and all those experiencing violence. Domestic and state violence are closely connected.

Tonight (as every night), 108,500 people in the UK are locked into a state institution that they are legally required to make their home. 2,500 people are detained in an immigration detention centre and 86,000 people spend the night in a prison; 18,000 are detained in a mental­-health ward, and 2,000 in a secure youth setting. Violence or abuse that they face within this home has strong similarities to domestic violence, which often takes place within the home – supposedly a place of safety and shelter. Many women and non-binary people in prison will have experienced multiple types of abuse: 46% of women in prison are survivors of domestic violence.

The domestic violence that takes place in home settings with intimate partners and family is replicated in state institutions by individuals acting in the name of the state. Husbands who terrorise
their homes with arbitrary rules use power in the same way as prison wardens make up petty rules and enforce them with intimidation. Immigration detention guards who enter women’s rooms unannounced mimic boyfriends who refuse their partners any privacy.  All act with entitlement, impunity and in the name of control.

When a person is subjected to violence in detention, it takes place where they are legally required to make their home. It takes place where they are entitled to safety and security.  Whether it is a person, system or structure that perpetrates violence, it is an act of violence that is difficult to escape from. This can include solitary confinement and
withholding medication or care. Such tactics put our trans sisters, those with disabilities and mental health needs at particular risk of abuse.

Despite the responsibility that detention centres have to maintain the detainees rights to
safety and security, they are widely run by private security companies known to be
active participants in violence against migrant sisters. Not only do private contractors
profit from detention, but they are involved in border enforcement (in many cases there
is evidence of violence), security in mental health units and hospitals, as well as prison
transportation.

Men with a history of violence are now responsible for vulnerable groups interacting with
the state. Security contractors specialise in control at all costs. Sisters may be under the
‘care’ of such private companies throughout any experience they may have with the
detention, deportation, mental health support, and at times medical care.

The government’s decision to hand over public support services to private security companies forces women and nonbinary people fleeing violent men to seek support from violent men. These are men who seek power and control over women, just like domestic violence perpetrators. There is a clear connection between the violence used by men in relationships and in the home and the violence used by men to control women in the name of the state.
The principles of unchallenged power and control remain.

Sisters Uncut are here to question, challenge and disrupt this power and control. The same private companies profit from border enforcement measures that leave our sisters, many of whom are survivors of domestic and sexual violence, locked in detention centres.

Violence should never be tolerated. We want freedom.

Join our week of action here!

#NoSisterisIllegal: Migrant Women and Domestic Violence
Occupy vs. Reclaim: what's in a name?
Tweets by @SistersUncut