TODAY at 5pm, as City Hall workers left the building, they were met with feminists reading the names of the many women of London murdered by violent partners since 2013. Two minutes’ silence was held.

After six year of Tories in City Hall and Westminster, London services are failing women. Refuges in London are being forced to turn away 2 in 3 women fleeing violent partners. This is twice the UK average.

Sisters Uncut ask what Sadiq Khan will do to save London’s domestic violence services, and be the proud feminist in City Hall he has promised to be.


According to the Women’s Aid London Grants Monitoring Report 2013-15:

Services and refuges have been forced to close, or run a severely limited service.  If the scale and pace of the cuts continues, more vulnerable women in London will be left without life-saving support. More women risk death at the hands of violent partners or ex-partners.

Domestic violence support services are a lifeline for women fleeing abusive partners. Women’s Aid research shows that women with substance misuse needs, women without recourse to public funds and women with mental health support needs are being turned back to abusive partners at an even higher rate.

Sisters Uncut demand that London’s new mayor, Sadiq Khan, who has committed to protecting domestic violence services, intervene immediately to secure funding for services in the capital. They group awaits his response and plan for action.

No arrests were made.

Selena Lowe, a domestic violence support worker, says: “It’s heartbreaking when even one woman has finally pulled together the huge courage to leave, but there’s nowhere safe for her to go. The fact this is now happening to thousands of women in London is devastating”

Grace Evans, a Sisters Uncut activist, says: “The last Mayor of London failed domestic violence survivors on a mass scale. Sadiq Khan has a real chance to make women safer in our capital.” 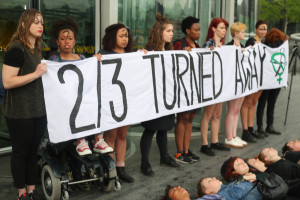 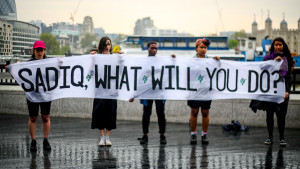 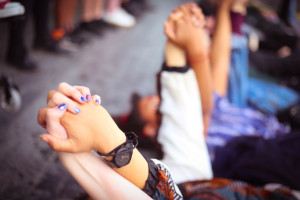 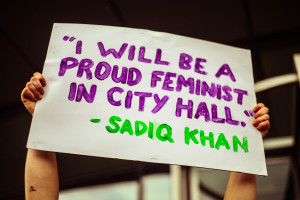